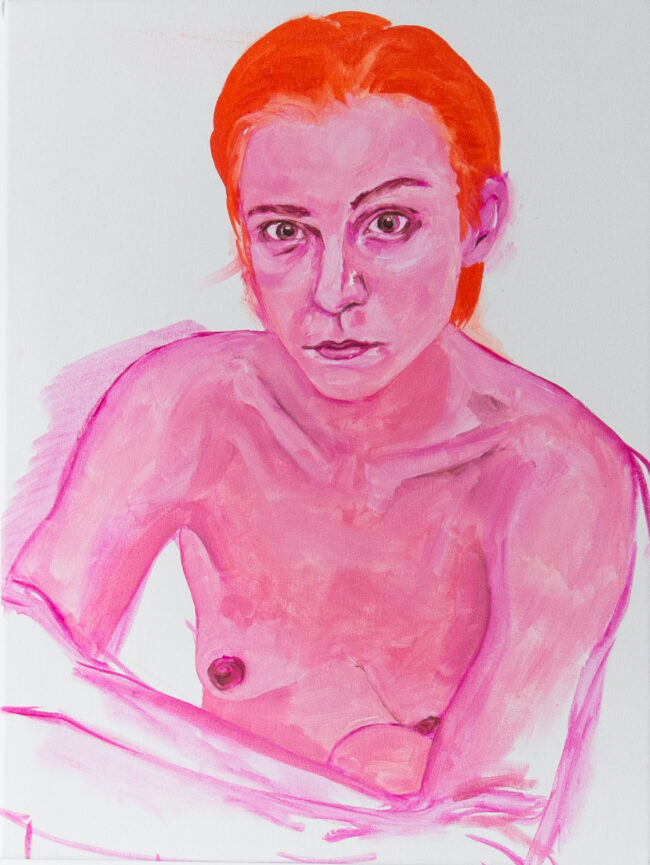 Clara-Lane Lens is a Belgian artist currently based in Berlin. Recent graduate of the LUCA School of Arts in Gent, she can’t imagine her life without painting. Surrounded by art since she was born, first by music through her father, Clara-Lane decided to dedicate herself to painting, which allows her to express herself fully.

Of a curious nature, Clara-Lane is inspired by people; paying attention to the way they walk, talk, dress, and interact with each other. Her models are her friends, acquaintances, but also strangers she met in a café, at a party, or even in the streets. First, Clara-Lane gets to know her models and then photographs them in the intimate setting of their home, where they are at their most unguarded. In her work, Clara-Lane wants to capture the instant when a person detaches themselves from the role they perform in society, a moment of vulnerability. Her models seem lost in their thoughts, introverted, almost physically absent. Giving themselves entirely to the artist, the models appear ambivalent in their portrait, both defenceless and powerful in their posture and gaze. Clara-Lane keeps on developing her technique, painting on increasingly bigger canvases, aiming to depict more of her models’ living spaces, mirrors of their inner beings.

The artist’s thought process is made apparent in her technique. Clara-Lane always starts her canvases with the eyes. Without sketching first, Clara-Lane tries to capture the essence of the model through their gaze. From there, Clara-Lane lets herself be guided by a glaring pair of eyes, aiming to tell a story with her brushes. She perfects specific zones in her canvases, such as faces and hands, organs of all five senses, while leaving other areas still sketched. This allows her to bring her reflexion into focus and let the person’s essence live through the canvas.

Moon in Vertigo is part of the Genderless series, brought to life 4 years ago when the artist painted a portrait of an androgynous woman. This portrait raised many questions about gender around Clara-Lane and pushed her to start this series on gender identities to deconstruct societal norms and stereotypes. At the very beginning of the series, the artist used to take out all external and biological attributes to distance herself from the inaccurate idea that gender is connected to something physical. Through numerous encounters with people living outside the binary cis-normativity, Clara-Lane deconstructed her own thought-process and questioned her preconceptions of gender identities. This deconstruction process pushed her to develop a new approach to painting. The artist now illustrates sexed bodies, with physical attributes and external signs that could be defined as gendered. Clara-Lane wants to show that gender and sex are distinctive, that external characteristics do not automatically affirm one’s gender, even if some people do use them to affirm theirs. Clara-Lane claims an understanding of gender identities that goes against cis-normative and binary stereotypes. Humane, personal, and timeless, Moon in Vertigo invites the viewer to deconstruct their biases on gender identities and binarity. Between abstraction and figuration, Clara-Lane paints gendered, sexed, sensitive and tangible people in an intimate and powerful atmosphere.

Necessary Marketing Politique des cookies
Please note that essential cookies are essential for the site to function, and they cannot be disabled.
Cookies techniques
To use this website we use the following cookies which are technically necessary.
WooCommerce
We use WooCommerce as a shopping system. For the shopping cart and order processing 2 cookies are stored. These cookies are strictly necessary and cannot be disabled.
These cookies are set through our site by our advertising partners.
Google Analytics
We track anonymized user information to improve our website.
Refuser tous les services
Accepter tous les services